BLACK MAMBA – Stay Away from the “Shadow of Death” 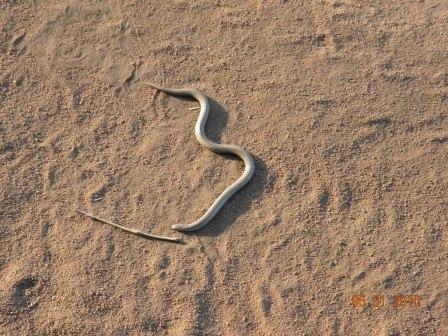 Black Mamba - this is a baby, but its poison can kill you!

Africa’s largest and the world’s second venomous and deadliest snake (King Cobra is number 1), and known as the ‘shadow of death’, the Black Mamba (Dendroaspis polylepis), a tree snake, is found in South, East and in some parts of West Africa. Some African Myths however, about the Black Mamba overestimate the snake’s abilities. The black mamba is not shrewd, intelligent, or anything else that would normally be attributed to humans.

Though it is called the ‘Black Mamba’, it is actually not black; it is either olive or brownish gray with little purplish black on the lining of its mouth! It is actually a long slender snake with coffin-shaped head. One look at it and you will think that it is just an ordinary harmless snake! It is neither strong nor robust but highly poisonous; this poison kills its preys on the spot! It can grow up to 168 inches in length; travel 14 miles/hour along the ground and 7 miles/hour to 12 miles/hour for longer distances!

A black mamba prefers open areas – savannas, open woodlands and rocky areas. Therefore, they are found between southern Ethiopia and southwest Africa. It loves to make its place in empty termite mounds, rocky crevices, burrows and hollow of trees.

Although black mamba is the deadliest snake, basically it is of timid and nervous nature. It normal gets out of the way of the humans but if by chance you corner it, it becomes highly aggressive. It will raise its head 36 inches to 48 inches off the ground, flatten its neck, show its mouth and produce a hissing sound. Then, it will instill few quick strikes before retreating away.

It has full confidence in its speed and toxicity! Being a tree snake, it is also at ease with the ground where it usually hunts. It normally rests or basks in the sun while on a tree. It is also diurnal – hunting during the day and returning at night to its hiding place.

When it targets its prey, it strikes once or twice after which, the prey is released to die on its own. Then it eats the prey! Where birds are concerned, it does not release the bird; it keeps holding the bird and when the bird dies, it swallows it.

It feeds on squirrels, voles, rats, mice, small birds, small mammals and snakes. When hunting, they will strike their prey once or twice. They will release the prey, allowing it to die before consuming it. One exception to this is when they hunt birds. Many times they will hold on to their meal, in order for it not to escape. They will then find the dead victim and due to the elasticity of its jaws, generally swallow their prey whole.

On an average, a female black mamba will lay about 14 to 15 eggs, after which they leave the eggs to be hatched on their own. When the eggs hatch after 3 months, the newborns start hunting immediately. They are often 12 inches to 24 inches long and grow fast.

So far the black mamba has not been given a conservation status; they are open to human exploitations.