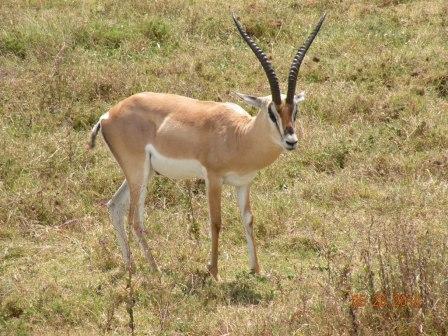 Larger than Thompson’s gazelles, a Grant’s gazelle (Gazella granti) shares the same coloring and marks and can be distinguished by a broad white patch on the rump which extends upward, then beyond the tail and finally, onto the back. In some, there is a black stripe on each side of the body and in some this stripe is either very light or not present. Also, a black stripe runs down the thigh.

A Grant’s gazelle is large, pale and fawn-colored gazelle with long legs. The horns of a male are longer than that of a female gazelle.

A brief profile of the Grant’s gazelle is as follows:

Grant’s gazelles preferred habitat is open plains and grasslands though they tend to avoid areas of high grass.

A male Grant’s gazelle establishes eight-month hold territories and always tries to hold back the female herd of 10 to 25 when they pass the territories. It stretches and squats while dropping dung and urinating to mark its area.

The fighting of Grant’s gazelles is worth seeing – it starts with ‘pretend’ grooming; then they repeatedly scratch their neck and forehead with the hind foot. If neither combatant is intimidated, they confront one another and clash horns, trying to throw the other off-balance.

Grant’s gazelle eats herbs, shrub foliages, shoots and short grasses. It can go without water for some time as it obtains the required moisture from food.

It can breed any time of the year but it prefers the rainy season because then the food is in bounty. Its gestation period is about 7 months. When a fawn is born, the mother gazelle cleans it very carefully. When it is able to stand up, the mother suckles it and tries to hide it somewhere away from the predator’s eyes. Once the mother finds a good place to hide the fawn, it remembers the place so that it can come back to the fawn after grazing to feed it. The mother does this three to four times a day. The lying out period is more than two weeks.

When the fawn is about a month, it first eats some solid food though it is suckled till about 6 months. At about 18 months, it becomes sexually mature. A male fawn then leaves the herd and joins the bachelor’s herd but female fawn sticks to the mother and moves around in the herd.

The only long-lasting relationship among the Grant’s gazelles is that of a mother and its most recent offspring.

A Grant’s gazelle is a good target to the lions, leopards, cheetahs, hyenas, hunting dogs, pythons and humans. Humans hunt it for valuable skin and meat