Ostrich: head in the sand

OSTRICH: Enemy coming, duck your head in the sand! 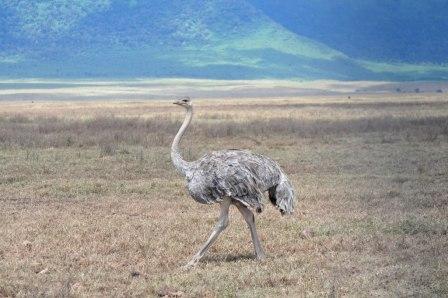 Ostrich I think of Australia, but this is Tanzania, Africa

With biggest eyes and longest powerful legs, an ostrich (Struthio camelus) is the heaviest and the largest living bird on earth. Though it has wings, it cannot fly but if chased, it can run a great distance with high speed and stamina.

A brief profile of the ostrich is as follows:

Open countryside is the best habitat for this largest bird. Therefore, it is often seen in wildlife sanctuaries along with zebras, antelopes and animals that are herbivorous.

Wherever there is food and water, an ostrich can be seen. Basically, it is nomadic in nature. It’s most important senses are acute hearing and excellent eyesight. The thick eyelashes protect it from frequently occurring sand storms. It is an important sentinel for zebras, gazelles, antelopes and giraffes.

The intestine of ostrich is 14m long! Though ostrich is omnivorous, it prefers to feed on seeds, roots, leaves and flowers of plants and trees. Sometimes, it also eats small invertebrates and locusts. It does not need to drink water separately – it gets water (moisture) from the plants it eats. To reduce water loss during the summers/hot season; it can raise its body temperature by 4°.

Sometimes an ostrich would eat unpalatable (to other animals) food which it can digest with the help of its intestine that is 14 m long! Sometimes it would swallow sand and pebbles which would get stored in their gizzards to break down hard plant materials!

An ostrich is roughly 96 inches tall and can weigh anywhere between 138.6 lb and 231 lb. The male is normally heavier and bigger in size than its female counterpart. It lives for up to 30 to 70 years.

The breeding age of an ostrich is usually 4 years and its breeding behavior is quite remarkable! Before the onset of the rainy season, the mating and the egg laying take place so that when the chicks hatch, there would be plenty of food available for their healthy growth. An ostrich being polygamous has four or five females around him – all the females will lay their eggs in one nest over a 3-week period. The number of eggs in total would be between 20 and 25.

The eggs are almost spherical in shape; each egg is about 6 inches long and equivalent to about 20 hens’ eggs. But only about 10 to 12 eggs are able to hatch because of jackals eating away the rest. The male ostrich will incubate the eggs at nights (its dark feathers make it difficult for the predators to find the eggs) and the female ostrich would incubate the same during the days (its brown feathers gel with the color of the grassland). Normally, a young ostrich would hatch after 45 days – it starts running minutes after hatching!

An ostrich takes good care of its young ones and would often defend them against the predators with distraction displays. The young ones become independent at the age of one!

It is a good target to the jackals. Cheetahs, lions, leopards, wild dogs, hyenas and large eagles can also pose a great threat to the ostrich.

The major threat an ostrich face is from the human who are after its soft feathers (to use in the headgears) and eggs (to use the shells as water containers or its pieces as necklaces).