LEOPARD – the Most Cunning Big Cat 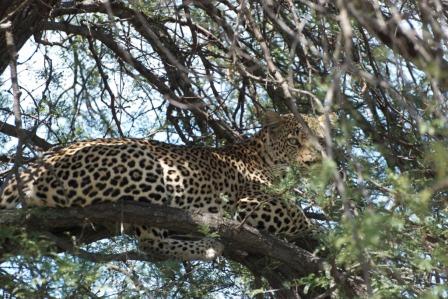 The leopard (Panthera pardus) is the most cunning, shrewd, elusive and secretive carnivore. It can climb trees easily and kills preys larger and heavier than itself. The coat colors vary from tawny to a darker shade. In the east African leopards, the black spots are round whereas in the South African leopards, the black spots are square. These spots help it to stay away from predators – a perfect camouflage!

The leopard is basically solitary and tries to avoid each other. If other leopards try to intrude, heavy fighting takes place. It also uses claws to mark on trees to warn other leopards to stay away!

When content, it purrs but when angry, it growls, spits and roars furiously. It has excellent sense of smell; it marks its area of superiority with urine. It is nocturnal – resting and sleeping during the day (on trees or in thick bush where it cannot be easily recognized), active and hunting during the night.

A brief profile of the leopard is as follows:

Though a leopard has the capability to adapt to many places, both warm and cold, it prefers a habitat of bush and riverine forest.

When a leopard targets its prey, it moves through the grass/bush stealthily till it gets close enough to the prey to attack. Then it kills and takes it away to a place where no other predators (lions and hyenas) can have the share of food. When a leopard is in no mood for hunting, it moves through the herds of other animals (especially grass-eaters) and flips its tail over its back to show the white underside – a sign to show that it is not in the mood for hunting!

A leopard does not stay in one area for more than 3 to 4 days; it moves around – like a vagabond. Because of this reason, some way or the other, one leopard gets to know the marking and calling of another leopard and so on – it can easily keep a track of the whereabouts of the fellow brothers! A male leopard is seen to accompany a female leopard for a week or two before they part and return to their solitude.

A leopard stands 28 inches at the shoulder and can weigh as much as 140 pounds. It can easily live up to 21 years in captivity because of their adaptability to the surroundings.

After giving birth to the cubs, the female leopard gives up its vagabond life to be with the cubs for about 3 months. For the initial 8 weeks, it will keep the cubs hidden after which, it will suckle the cubs for 3 months or little more till they are well able to be on their own.

The leopard has long been a target to humans for its soft fur.