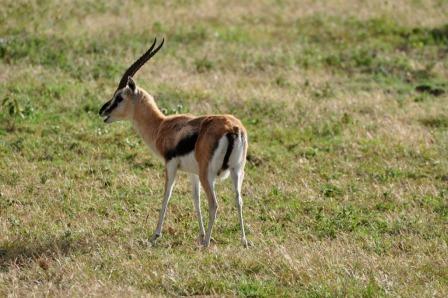 Thompson's Gazelle, one of the beautiful wild animals in africa

A Thompson’s gazelle (Gazella thomsonii), though not widely distributed in the whole of Africa, is still a common gazelle in Eastern Africa. Lovingly called the graceful ‘tommie’, it is smaller than a Grant’s gazelle but shape and color (cinnamon/fawn on the top with white underside) are more or less the same.

On the face of a Thompson’s gazelle, there is a light patch on the forehead; a black stripe runs down from the eye and there is a dark mark on the nose. It has a dark side stripe that runs from the shoulder to the flank, a white patch on the rump and a black tail. The scent glands are located beneath the eyes.

A brief profile of the Thompson’s gazelle is as follows:

A Thompson’s gazelle’s preferred habitat is open plains and grasslands where plenty of food is available.

To set up a territory, a male Thompson’s gazelle either urinates or defecates on dung piles. Then, to mark the boundary, it deposits a small amount of secretion from the scent glands onto a blade of grass and marks about 20 ft daily till the territory gets covered. But when a herd migrates, it establishes a new territory and marking the boundary continues in the same manner.

A female Thompson’s gazelle, along with other females and offspring, form a herd of 5 to 50 and graze around. There is nothing called hierarchy or leadership in a herd.

Daily, a herd gets together in the early morning and late evening when the young ones play – bouncing and sprinting most of the time within the perimeter of the herd itself.

A Thompson’s gazelle breeds two times a year. Although births take place throughout the year, the most suitable time is just after the rains. After giving birth, a female Thompson’s gazelle hides the newborn in the grass and leaves; it comes back to the newborn during the nursing time. This is the time when the newborn Thompsons gazelle are open to predators though their tawny color and motionless posture save them sometimes.