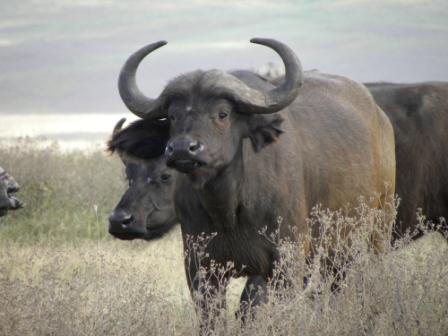 A cape buffalo is a hoofed mammal with drooping fringed ears and ridged heavy horns growing straight out from the head or curve downward and then up.  These horns have many uses – against predators, jostling for space within the herd and fighting for male dominance.

Normally placid if left alone, a Cape buffalo (Syncerus caffer), or African Cape buffalo, or Savanna buffalo (as it is commonly called) is very unpredictable and can prove to be very dangerous when it is concerned or when it is wounded.

It has made its place in the ‘Top Five’ or the ‘Big Five’ group of animals found in Africa – buffalo, lions, leopards, elephants and rhinoceroses.

There exist in Africa 2 distinct sub-species:

A brief profile of the Cape buffalo is given below:

Both the sub-species prefer living closer to the water and as such, grasslands, savannas and lowland rain forests are their choice of habitat.

A cape buffalo lives in a herd of two hundred or more mainly consisting of females and their young ones as the males prefer leaving the herd when they are about 4. Both hearing and sight are very poor in a cape buffalo but the sense of scent is very developed.

Normally, a cape buffalo would feed at night, its main food being grass.

After the birth of a calf, it is seen that the female and the young one have an unusual prolonged and intense relationship. The young one is totally dependent on the mother till about a year, after which it can move about freely.

A cape buffalo is often a target to the lions, leopards, cheetahs, hyenas, crocodiles and humans. If by chance a herd drifts towards human settlement, the cape buffalos raid the crops, break the fences and help in spreading bovine diseases to the pet livestock.