HARTEBEEST – A ‘tough ox’ or grassland antelope of Africa 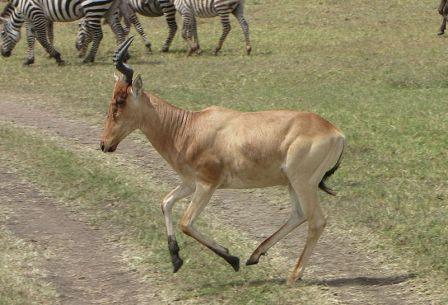 The word ‘hartebeest’ means ‘tough ox’. Being fawn-colored, hump-shouldered, large antelope, a hartebeest (Alcelaphus buselaphus) on one hand is clumsy in appearance – steep sloping back, long narrow face and slim legs but on the other hand, it has stout horns, short strong neck and heavily muscled shoulders. It is also one of the fastest and enduring runners.

The most important diagnostic indicators are its coat color and shape of the horns and accordingly, they are named:

A brief profile of the hartebeest is as follows:

A hartebeest prefers habitat of open plains and tree grasslands. It is more tolerant to high grass and woods than other antelopes.

Though a hartebeest is a sedentary antelope, it obviously moves around to find water and better grazing during dry seasons or drought. Males become solitary and move out to other areas but they cannot do it for long if they have to keep a hold of their territories (open areas with short grass).

The females form small groups of 5 to 12 and move together in their home range; they try to find the best grazing.  Males become very aggressive during the breeding period and are always in the fighting mood with one or the other male. A ritualized series of head movements and body stances, followed by depositing droppings on long-established dung piles to mark the borders of territory, normally precede a fight.

A hartebeest feeds entirely on grass and is tolerant to poor-quality food because of cattle that compete for the same food.

A hartebeest’s social pattern is quite different from any other antelopes – adult females, instead of associating with other adults, are always accompanied by up to four generations of their young. At the time of birth, the expecting hartebeest isolates herself in scrub areas and leaves the young calf hidden for about 15 days; during this time, it would only visit the calf at the time of suckles – may be it does not want a predator to get the scent of her calf. A female young stay close to its mother from the time of its birth to the time it gives birth of its own calf!  A male young stays with its mother for about 3 years.

Calves take birth throughout the year though the breeding period is considered to be the onset of the rainy season.