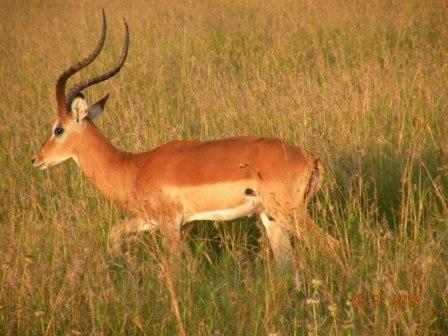 IMPALA - Can reach running speeds of about 50 to 56 mph

An impala (Aepyceros melampus) is of reddish brown/chestnut brown that tends to become lighter on the shoulders, neck, thighs and legs. It has white hair at many places – the buttocks, the under-parts, the upper throat, the chin, over the eyes and inside the ears with a distinguishing dark stripe on each haunch. This dark stripe also appears on the back of each thigh and a narrow black line runs along the middle of the lower back to the tail.

A scent gland, located on the lower part of the hind leg, is covered with large (brush-like) tufts of long, coarse black hair. The male and the female look similar; so, the only way to know a male is by its horns.

A brief profile of the impala is as follows:

An impala’s preferred habitat is savanna and light woodlands with water available in plenty.

An impala adapts to any environment easily, especially where food is available in plenty. A male impala is very territorial – it sets up a territory and marks it by dung heaps. It also rubs scent from face glands and stands with erect posture. During intense mating, the male vocalizes loudly that sounds like a lion’s roar and a dog’s bark. A bachelor male is allowed to remain in a male territory if it ignores a female!

The females form a herd from 10 to 50 (sometimes more), and walk in and out of the male territories. But it is risky as the males try to stop them from walking out and try to mate with them.

An impala normally eats herbs/shrubs but during the rainy season, it eats the tender grass shoots. It also drinks water daily, especially in the dry season.

An impala is about 28 inches to 36 inches tall and weighs a maximum of 135 lb. Its lifespan is about 12 years or a year or two extra (if it can stay out of the way of the predators for long).

A female impala can give birth to a fawn any time of the year but it has been seen that most of the fawns are born during the rainy season. When the birth time arrives, it leaves its herd and looks out for a secluded area to give birth to its fawn. After the fawn is born, the female will stay with it for at least a week before joining back its herd with the fawn by her side.  It is because with many fawns in the herd, the predators will not take the risk of going after them.

A fawn suckles for 4 to 6 months and reaches the maturity level around the 13th or 14th month. If the fawn is a male, then it gets thrown out of the herd at 6 months; it then joins a bachelors’ group. A male impala takes time to reach the maturity level – at the 5th or the 6th year!

An impala is a good target to the lions, leopards, cheetahs, hunting dogs and hyenas. The fawns, in particular, are killed by jackals, baboons, pythons and eagles.