SPOTTED HYENA – You can Hear their Laughing and Howling at Night 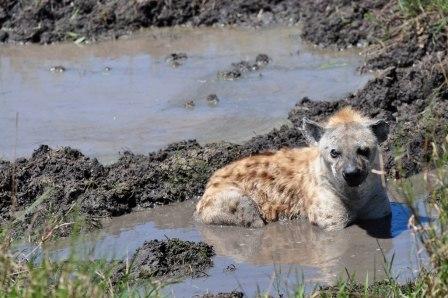 The most common and large carnivore in Africa is the spotted hyena (Crocuta crocuta). History speaks of hyenas in Egypt, where they would be domesticated and well looked after for the purpose of eating them.

The hyena, though it is timid and cowardly by nature, can suddenly go bold and dangerously attack animals and humans.

There are three types of hyenas found in Africa:

A brief profile of the spotted hyena is as follows:

A spotted hyena’s preferred habitat is either the savannas, or the grasslands, or the forest edges, or the woodlands, or the mountains – places up to 13,000 ft level. It seems that it adapts to any environment, any habitat.

Spotted hyenas are very organized – they move around in clans and defend their home vehemently. Their den, situated usually on high ground, is where the young ones are raised and looked after till they could be on their own.

Being a marked hunter and a scavenger, it eats other animals like domestic stock, other small hyenas, animal droppings, vegetable matter, carrion and bones. It hunts mostly during the night and finishes up all the food by morning – sometimes traces of their food are not even found! It also drinks very little water.

At one time, a spotted hyena gives birth to 2 to 3 cubs; though these cubs start eating from 5 months, they suckle mother’s milk till they are about 1½ years of age. When they are of 1 year, they start to follow their mother on her hunting and scavenging spree.

Spotted hyenas tend to emit giggles and grunt-laughter in situations of great excitement. That could perhaps indicate a conflicting tendency to flee or stay. The giggles, yells and grunts which accompany mass feeding tend to be directed at competing individuals at a carcass, and has the secondary, disadvantageous effect of attracting lions and other spotted hyenas. The pitch of the laugh indicates the hyena’s age, while variations in the frequency of notes used when hyenas make noises convey information about the animal’s social rank. Soft grunts are made by females calling their cubs. When attacked, spotted hyenas will emit loud growls and whimpers.

Hunting dogs, lions and other hyenas make a spotted hyena their easy target.