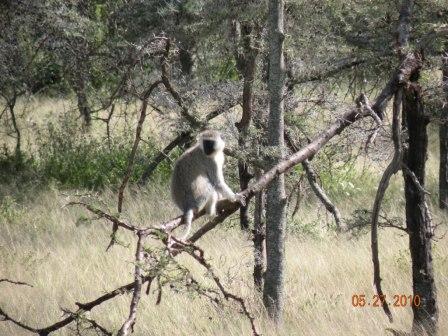 Though the Vervet monkey varies in color, the body of a Vervet monkey (Cercopithecus aethiops) is, in general, greenish olive or silver gray. It is a black-faced small monkey commonly seen in East Africa. It has to capability to adjust to any environment; therefore, it is very widespread.

The face, ears, hands, feet and the tip of the tail are black but a white band on the forehead blends in well with short whiskers. A male is recognized by its turquoise blue scrota. Its tail is usually held up, with the tip curving downwards. Its arms and legs are more or less of the same length.

A brief profile of the Vervet Monkey is as follows:

A Vervet monkey’s preferred habitat is the woodlands, savanna and the high bushes. It can even live in mountain areas at 13,000 ft. It does not inhabit rain forests or deserts. It is diurnal – sleeping and eating in trees from which it hardly comes out.

It makes complex but stable social groups of 10 to 50 adult females and their offspring. A male Vervet monkey moves freely in these groups. Each adult female in a group is the center of a small family network. Females who have reached puberty generally stay in the group.

In a Vervet monkey’s life, grooming is very important. It spends many hours removing parasites, dirt or other material from one another’s fur. The dominant individuals get the most grooming. Feeding, mating, fighting, friendships and survival are controlled by the hierarchical system.

Though a Vervet monkey chirps and chatters to call one another, it normally screams and squeals when in danger.

Vervet monkeys are about 18 to 26 inches tall and weighs between 7 lb and 17 lb. Its lifespan is about 24 years in captivity and about 20 in the open.

This monkey’s gestation period is about 5½ months. A young one is suckled for about 4 months. As it grows up, it is taught to eat solid food but the weaning process completes when it is about a year old.

During the infant stage, a close relationship and social bond begin to develop with the female relatives. An infant holds a special attraction to sub-adult females – they want to groom the infant and hold it in their arms.

A newborn has black hair and a pink face; after about 3 or 4 months, it acquires adult coloration.
During the first week, an infant clings to its mother’s stomach. During the 3rd week, it starts moving around on its own and plays with other young monkeys. Sometimes the mother does not allow the infant to play or does not allow the other adult females to hold the infant or carry it. Its play consists of chasing one another, wrestling, tumbling and playing ‘king-of-the-castle’– taking turns to push each other off a high perch.

Vervet monkeys are an easy target to the leopards, eagles, caracals, baboons, crocodiles and pythons.