CROCODILE: A dangerous reptile found all over Africa, weighing up to 2,204 pounds 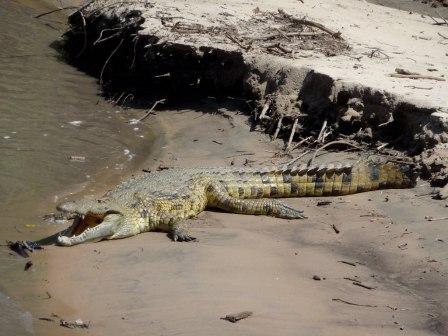 Nile Crocodile - the most dangerous of crocodiles in Africa

A crocodile (Crocodylus niloticus) is a tropical reptile and is one of evolution’s most successful products. Its twenty-three species have adapted to life in many parts of the world out of which, three species are found in Africa, but the most common and the most dangerous of which is the Nile crocodile (found throughout Africa) – it can reach lengths of more than 240 inches.

Also a crocodile is found throughout South Africa in rivers, estuaries, mangrove swamps and freshwater marshes.

A brief profile of the crocodile is as follows:

The crocodile’s preferred habitat is water and land (to rest and lay eggs).

A crocodile has a cerebral cortex; a four-chambered heart and a streamlined body to swim swiftly. It can tuck its feet to its sides while swimming; its webbed feet allow it to make fast turns and sudden moves in the water. It has a palatal flap that blocks the entry of water in the mouth. Its tongue is held in place by a membrane which limits movement; as a result, it is not able to stick out its tongue.

A crocodile is very fast over short distances, in water or on land. It has sharp teeth for tearing and holding on to flesh and a powerful muscle system that close the jaws and hold them shut – so, it feeds by grabbing and holding onto its prey. It has limited side-to-side neck movement.

When fish migrate, crocodiles hunt together – they form semi-circle across the river and herd the fish after which, they eat the ones nearest to them.

A female crocodile normally nest on dry stream beds, or river banks, or on sandy shorelines around November and December every year.

A female crocodile gives 25 to 100 eggs; after laying the eggs, it covers the eggs with sand and guards them until they hatch, which takes about 3 months. When young crocodiles start hatching, either parent helps them out of the eggs by rolling each egg between their tongue and palate.

A crocodile faces great threat from the humans due to over-hunting and destruction of its habitat. Areas where the crocodile population has significantly lowered are Angola, Chad, Gambia, Guinea-Bissau, Nigeria, Senegal, Zambia, Togo and Congo.