GIRAFFE: Tallest of all animals and has a distinctive walk 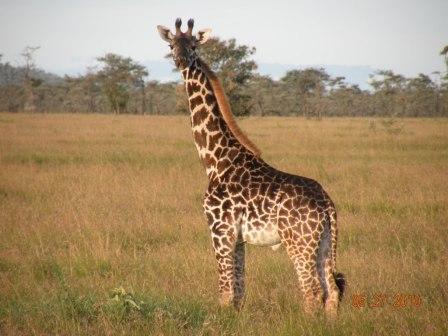 Giraffe: only their calves are in danger of predators

Tallest of all animals, a giraffe (Giraffa Camelopardalis) averages to be 6 ft tall at birth. Found mostly in Namibia, South Africa, Tanzania and Kenya, it has long legs, long neck and is spotted – a unique pattern can be seen on their body.

A giraffe also has small horns (about 5 inches long) that protect its head when it involves itself in fights. Vegetation at heights can be easily reached by a giraffe than by other herbivores. Its tongue is about 45 cm! Despite its long neck, a giraffe has only seven vertebrae.

A giraffe has a distinctive walking posture – it moves both right legs forward and then both the left legs. It has elastic blood vessels (very unusual) with a series of valves that help offset the sudden buildup of blood (and to prevent fainting) when the head is raised, lowered or swung quickly. It can run at a speed of 55 km per hour and rhythmically moves its head forward and backward to pull its weight.
There are nine subspecies of giraffe:

A brief profile of the giraffe is as follows:

A giraffe is non-territorial and quite social; it lives in very loose, open herds with no specific leaders or coordination of herd movement. Even though giraffes are often seen together in groups, they do not form the complex social groups of many plains species. Theirs are loose associations, constantly changing in make-up.
Even though a giraffe is a quiet animal, it makes a flute-like noise, grunts and moans. It has a sharp sense of hearing and can alert animals of nearby predators.
Food Habits

Being an herbivore, a giraffe eats (at dusk and dawn) leaves, especially Acacia leaves, and fruits. It can stay without water for many days as it stays hydrated because of the moisture content of the leaves it eats. To bend down to drink water, a giraffe spreads its front legs to allow the head to reach the water.

14 to 15 months is the gestation period of a giraffe. It can breed any time of the year though it prefers the rainy season. At 2 months, the calf starts eating leaves and at 6 months, it is still dependent on its mother. Groups of calves are left alone together during the day while their mothers feed.

Being too large, a giraffe is hardly predated but a calf is an easy target of lions and spotted hyenas. Humans also hunt giraffe for meat, tails and coat. There is not direct threat to adult Giraffes from predators as they are too large. However, their calves are vulnerable and cannot defend themselves from usually lion and the spotted hyena.

This animal is facing habitat destruction and fragmentation; it is being forced to move out from its natural habitat by the humans.