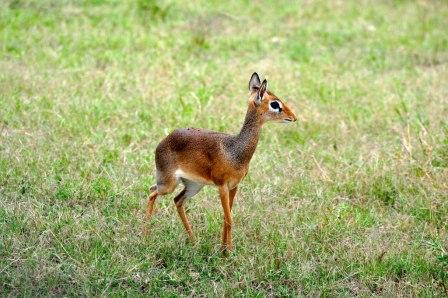 Madoqua kirkii or ‘DikDik’ is a small antelope that is known to change its color according to the habitat they live in. It is named DikDik from the ‘zik-zik’ whistling sound it makes through its nose when it gets disturbed or frightened.

It has large dark eyes surrounded by a white ring. There is a black spot below the inside corner of each eye. This spot contains a preorbital gland that produces a dark sticky secretion. Grass stems and twigs are inserted in it to scent-mark its territory.

It can tolerate temperature up to 104 degree Fahrenheit. When there is less or no water, or when it is very hot, this antelope combats overheating with a cooling mechanism – bellow-like muscles in its elongated snouts pump the blood in its body; this blood is then cooled by airflow and evaporation, and re-circulates the body.

It is known to form monogamous pairs; it marks its territory with preorbital gland secretion and by depositing its dung.

It is an alert animal with well developed sight, scent and hearing. It tends to hide, rather than escape, when it is in danger.

It is basically nocturnal because it tends to avoid the heat of the day.

4. Its habitat is dense forest to open plains.

6. Its gestation period is 6 months.

7. It is an easy prey to humans and many small carnivores.

It can live in various habitats – from dense forest to open plains – but there should be no tall herbage. When the grasses grow high and it is not able to see properly, it moves to another habitat.

With a gestation period of 6 months, a Dikdik female delivers only one offspring at a time. Both the parents take good care of it and stay with it till the mother gives birth to another offspring. With the coming of the new offspring, the sub-adult gets chased off by them to lead its own life.

It is herbivorous; it eats shoots, berries and fruits. In doing so, it gets enough water from its food. No doubt it can live independent of water.  Salt is very important in DikDik’s diet.

It is an easy prey to humans, and to mongooses, jackals, servals, hyenas and other small carnivores.

Snares are put in DikDik’s pathway when a human wants to hunt it, which is carried out quite often. Then, the small bones in its legs and feet are cured and used in traditional jewelry. Even its skin is used for making gloves.