HIPPOPOTAMUS: They’re Hard to Spot on Land – they Spend Daytime in the Water 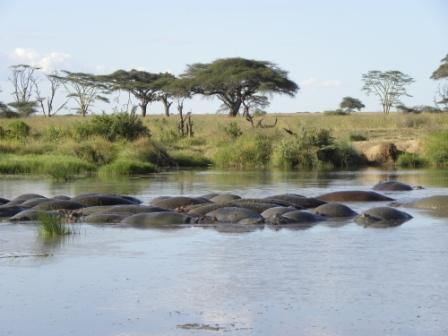 Hippos in a Pond

If you’ve ever been on a safari you already know that it’s pretty unusual to see a hippo out of the water. That’s because they love the water and among other things it keeps them cool and helps keep biting insects off of them. They usually are out of the water at night, but in many places you are not out at night on safari so you’ll miss them when they are on land.

As of now, there are two species of hippopotamuses (Hippopotamus amphibious) found in Africa:

Normally, with an outsized head, very broad mouth and pig-like facial features, a hippopotamus has a body shape like that of a barrel with stocky legs and hairless smooth thin skin, accompanied by a short tufted tail.

A hippopotamus spends its days in water/wallowing in the mud and comes out of water at night when it feels hungry. To keep its skin moist in the hot humid climate, it secretes pinkish-colored oil on the skin.

A hippopotamus is a fast runner – it can run at 30 km per hour for a few hundred yards!

A brief profile of the hippopotamus is given below:

A hippopotamus prefers rivers, swamps and protected areas as its habitat.

Being a proper herbivore and an efficient grazer, a hippopotamus prefers to eat short grass. It eats during the night by grazing for about 4 to 5 hours and then, goes back to the water with the onset of dawn.

A hippopotamus is about 60 inches tall and can weigh anywhere between 3,960 lb and 8,800 lb. The male is normally heavier than its female counterpart. It lives for up to 50 years though the normal lifespan of a hippopotamus is roughly between 20 and 40 years.

After about 210 to 220 days of gestation period, a female hippopotamus gives birth to a single calf during the onset of the rainy season. The average interval between two calves is about 2 years. It gives birth in shallow water and therefore, the calf is able to swim from the very birth!

A hippopotamus, especially a calf, is a sure target of the lions on land and the crocodiles in water.  It is a target of the humans for its hide, meat and tusks (sold as ivory in the market).

Pygmy hippopotamus is sure facing threat (have declined in number in the past few years) because of wide range deforestation taking place. It is now more prone to dangerous and destructive habits of the humans.