ROCK HYRAX: the nearest relative of the elephant? 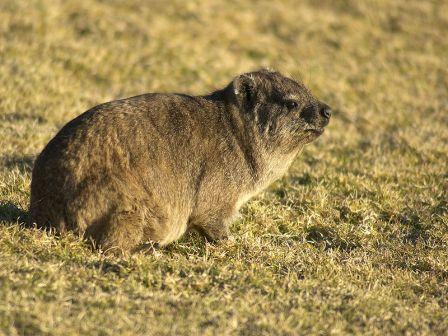 Also called ‘dassie’ or ‘rock rabbit’ and said to be the nearest relative of the elephant, the hyrax is a furry small mammal that looks like an obese guinea pig. The relationship with the elephant is due to the fact that the remote ancestors were common to the dugongs, manatees, hyraxes and elephants.

The Swahili names for them are pimbi, pelele and wibari, though the latter two names are nowadays reserved for the tree hyraxes. This species has many subspecies, many of which are also known as Rock or Cape Hyrax, although the former usually refers to African varieties.

The toes of the hyrax, four on each front foot and three on each back foot, are stumpy with hoof-like nails. On the inside toes of the back feet, it has claw-like nails which are used for scratching and grooming. For climbing steep rock surfaces and trees, there is a rubbery texture at the bottom of its feet.

A brief profile of the hyrax is as follows:

There are three types of hyrax found in the wild:

Being very adaptable, the preferred habitat of rock hyrax ranges from dense rain forest to dry savanna, at an altitude of 14,000 ft.

In natural crevices of rocks, Rock hyrax lives in colonies of 50 where there are one male and about 20 female and young ones. The Rock hyrax uses it’s ‘latrine’ to mark its area. It is active during the day and feeds/sunbathes near their home entrance.  Its cry is usually a twitter, a growl, a whistle or shrill shrieks.

Rock hyrax eats quickly with the family group but is always alert for predator attacks. It eats grass, leaves, fruits, insects, insects, lizard eggs and eggs of the birds. Every time it eats some, it pops up its head and looks around to see if any predator is nearby. If not, it continues eating but if a predator is seen around, it immediately tries to run away from that place.

A rock hyrax is about 12 inches tall and can weigh anywhere between 5 lb and 9 lb. It lives for up to 12 years.

Rock hyrax gives birth to 2 or 3 fully developed young ones at a time, who after a few hours of the birth, start moving around like an adult.

Rock hyrax is a great target to the pythons, leopards, civets and large birds. Sometimes it gives a long chase but sometimes, it gets caught easily.