Home Animals The Big Five Lion: King of the Jungle

Lion: King of the Jungle

Lion: King of the Jungle 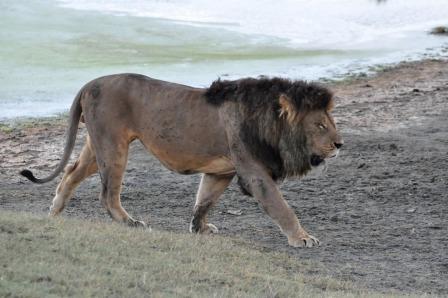 Why is the lion called king of the jungle? This phrase is a misnomer because lions don’t live in the jungle, they live out on the Savannah. Another reason may be because the lion is at the top of the food chain. Few animals will dare to challenge a lion, even in periods of extreme hunger, or fighting for territory. Sometimes a pack of hyenas get into conflicts with lions since their food sources are essentially the same. They have been known to attack and kill lions.

Another possible reason is that some people associate Africa with jungles, and since Lions live in Africa they make the erroneous association.

The largest member of the cat family and the largest of all the carnivores found in Africa, the lion (Panthera leo) is the topmost predator of Africa’s ecosystem. A male lion has thick mane around its head that extends down its chest and between the forelegs. This mane can vary from blond to black in color. A lion has massive shoulders, strong forelimbs, powerful short jaws and sharp long claws. A female lion does not have a mane.

Lions normally move around in groups called prides; one pride consists of 13 to 40 lions (mostly females) and their cubs, and their home area differs in size – 20 sq km to 400 sq km depending on the pride.

The lion is nocturnal and rests/sleeps for as long as 20 hours a day! It has 30 teeth – piercing canines, scissor-like molars and small incisors. A lion hunts in the night and early part of the dawn.

A brief profile of the lion is as follows:

Found in parts of south and east Africa, and throughout the south Sahara Desert, it prefers open woodlands, savannas and grassy plains.

As the lion is a typical carnivore, it feeds on the flesh of other mammals. After killing a large mammal, it can eat 36 kg at one go and then, eat nothing for a few days.

The gestation period of a lioness is about 105-110 days after which, she gives birth to a maximum of four cubs. During the time of the birth, the lioness leaves her pride to give birth in secluded areas and lives there till the cubs become eight weeks old. Because several lionesses give birth at the same time, they play very protecting and nursing mothers towards each other’s cubs.

After eight weeks, the lionesses join back the pride and the first thing they do is to introduce their cubs to the other pride members. When the cubs near 11 months, they learn the art of hunting but even then, they stick to their mother. The mother nurtures the cubs till they attain 2 years of age after which, she gets ready again to reproduce a new set of cubs.

The lion is the target of humans.

Though not currently listed under ‘endangered’ or ‘threatened’, lions are facing severe human exploitations like encroachment on land, loss of habitat and hunting.