WARTHOG: A wild member of the pig family that lives in Africa

By Charles L Harmon adapted from an article by Chitraparna Sinha 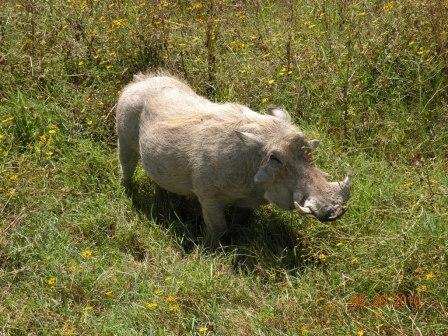 Known as the ‘naked swine of the savanna’ and named so because of large warts found on its head, this particular Africa animal, a warthog (Phacochoerus aethiopicus), is a member of the pig family – Suidae family.

Although some, maybe you, will think the African warthog is “ugly” it has earned solid name recognition here in the USA and elsewhere. This recognition is not as a natural animal, however.

Because of the popular name warthog:

I will use African warthog or similar in some places in this article.

A female warthog is polyvular (2 to 7 offspring a year); it can tolerate both high (it can conserve moisture inside its body) and low (it wallows and huddles together) temperatures. Two facial glands, a sebaceous gland (tusk gland located in the upper lid behind the tusks) and a preorbital gland play very significant role in the life of an African warthog.

The two existing warthog species found in Africa are:

A male African warthog live either alone or in bachelors’ groups and only comes to a female’s group for the purpose of mating. A female African warthog lives in a sounder – group of three females and their offspring – and remains there for several breeding seasons. By spraying urine and wiping saliva against objects, a warthog marks its sounder territory. For shelter purpose and hiding in the night, it uses burrows.

A brief profile of the warthog is as follows:

A favorite and preferred habitat for this African wildlife, the warthog, is the savanna and areas with light forests – it does not prefer heavy dark forests.

A warthog eats grass, roots, berries and bark and will sometimes eat carrion.