African Elephant: The Largest Land Mammal and Sadly a Target of Poachers 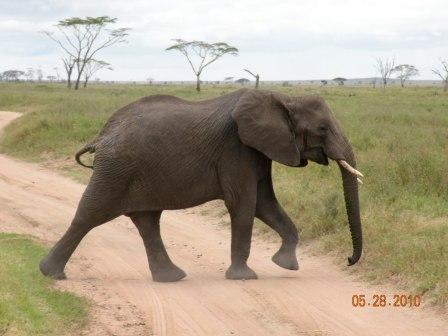 African Elephant - threatened by mans want of their ivory tusks.

The largest land mammal on this earth is the African elephant (Loxodonta Africana). Between its fore and hindquarters, it has a marked dip that gives its concave curvature to its back. The ears are large, fan-like and control the body temperature. It flaps its ears for the blood to circulate through the ears’ large vessels. It also has an acute sense of hearing!

In both the male and the female, large tusks can be seen which are used for digging up roots, peeling the bark off the trees, herding the young, drilling for water; sometimes the tusks are used as a weapon.

The trunk is the elephant’s most fascinating and trusting feature – it has two prehensile protrusions at the tip and is used for drinking, eating, dust bathing, water bathing and communicating. The trunk has two major usages other than the above:

The elephant’s eyes are very small compared to its head. Surprisingly, an elephant has poor eyesight! It has excellent sense of smell and excellent memory power. Once it sees something, it does not forget it.

The African elephant is of two species:

A profile of the elephant is as follows:

Though elephants are found in 37 countries of Africa, they are mostly seen in southern and eastern Africa as food and water here are in plenty.

Whatever an elephant weighs, its daily intake of food is 4% to 7% of its weight. It spends 16 hours every day in eating. Also, it drinks nearly 160 liter of water on a daily basis. An elephant’s food includes grass, twigs, barks, leaves and fruits.

After a gestation period when a calf is born, it weighs about 264 lb; it is weaned at 3 to 8 years – just before the birth of the next calf.

An elephant lives in social units and as such, it develops deep family bonding. A herd of elephants is usually led by the older females and includes 3 to 4 of her offspring and their young ones. The males leave the family between 12 and 15 and start leading solitary adult lives.

An elephant has always been the target to the humans for its tusks – ivory trade.

An elephant’s future is always threatened by humans and their settlements – as such, the elephant is losing its natural habitat. Poaching has significantly reduced the population of Loxodonta genus of elephants in certain regions during the 20th century. Although the African elephant nominally has some governmental protection, poaching is still a serious issue and threat to elephant populations.