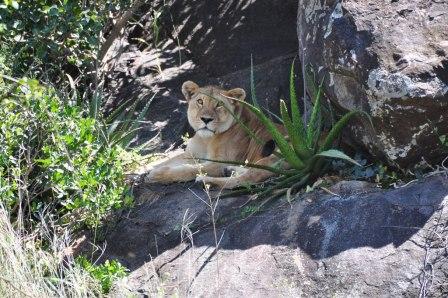 Africa – home to the “Big Five” mammals – is also the only place on earth where you can enjoy a safari and have a chance to see all the Big Five animals.

Many reserves have all the big five – lion, leopard, elephant, rhino and buffalo – but it’s not that easy to see them all on your first safari or even your second or third, particularly a leopard. Leopards are nocturnal, secretive and well camouflaged, but there are some places where leopards are easily spotted.

If you are not on a reserve it could take quite a bit of luck to spot a leopard. This is where a good, well experienced guide or driver is worth his weight in gold. They know, or are told by other drivers over their hand radios, exactly where a leopard has been spotted.

You might think it’s no big deal to spot a leopard, but I have heard of many safari goers that have been all the way to Africa on a safari and never once saw a leopard. That could also go for some other wild animals that are hard to spot like the cheetah or a serval, another smaller cat. Maybe I was lucky, but I’ve been on two African Safaris and saw all the big five on both of them.

However, just being in the bush, seeing all sorts of smaller animals and birds can be just as exciting as seeing lions, leopards, elephants and the other two of the big five. So, even if you miss out on one or two of the big boys, you’ll still have the time of your life assuming you have the right drivers and guides who are very experienced and your African safari has been well planned.

The countries where you have the best chance of seeing the Big Five are South Africa, Botswana, Zimbabwe, Kenya and Tanzania. South Africa has some private reserves alongside Kruger National Park, an area where you have one of the best chances of spotting every Big Five animal. You must remember, however, that you’re dealing with nature and nothing can be guaranteed.

Click here to see the Big Five we saw in Tanzania, Africa.