I just returned from escorting and accompanying a group on the Dream Safari. I personally planned the custom itinerary for my first-time client travelers to Africa. I wanted them to see as much as they could, while still getting the flavor of Africa in every sense. 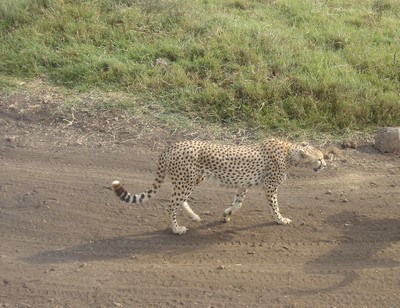 The trip was so fantastic; I will definitely consider doing it again in the near future. This was probably the equivalent of a safari costing thousands of dollars more.

The planning, advertising and organizing of the Dream Safari was a year in the making. The itinerary included Cape Town South Africa for four nights, Johannesburg two nights, private reserves bordering Kruger Park for four nights of game drives at Kings Camp and Simbambili. As if that wasn’t enough then we went overland to Sun City for two additional nights. Some of our group opted for an optional extension in Livingstone, Zambia for a Victoria Falls excursion. Those famous waterfalls are so breathtaking.

Our African itinerary began in Cape Town and took us on a Peninsula Tour where we visited a penguin colony, the only one of its kind in warm weather climate. Before I started traveling I had always thought penguins only lived in the coldest of climates. I’ll bet many of you did too.

We continued to the Cape of Good Hope, the southwestern most tip of the African continent. We certainly couldn’t leave Cape Town without visiting and doing some wine tasting at several of the wonderful wineries in the region. This reminded me of some of the nice wineries in Southern California but was oh so far away from home.

Another highlight of the trip was a visit to District Six. This was resettlement areas after the dismantling of apartheid. We also visited Robben Island, where Nelson Mandela was imprisoned for 27 years. Those places were both educational, and emotional.

Our visit in Cape Town ended with a home hosted dinner that was simply fabulous. That turned out much better than expected. Since they were actually strangers, I originally thought our safari group would have little in common with then, especially in such a distant foreign country. We talked the night away with stories, played games, and had very interesting conversations. Amazing! We arrived as total strangers and left as friends. That was such a wonderful way to end our stay in Cape Town. I’m sure some of our group would like to repeat that friendly house guest experience on their next African safari.

Following that unexpectedly nice, family plus our safari group dinner, the next morning we flew back to Johannesburg and spent our time visiting Soweto and Pretoria, now known as Tshwane. We visited the area where Nelson Mandela resides. We also visited townships in the area and explored the administrative capital of Pretoria. The most moving part of that visit was the Apartheid museum – an experience not to be missed. Although we spent a few hours in the museum, it could have easily taken over a day to digest everything on display.