As I remember this story, I wanted to share it. On this beautiful day in Tanzania, my story starts with a lady I met on safari, several years back. As I do on most of my safaris, wherever I stay I like to speak with others to find out how they ended up on safari. There have been some incredible stories. This is the brief encounter I had with two ladies who were traveling together on safari, when my conversation began with introducing myself and asking if they were enjoying their safari.

She responded, “honey, I’ve been wanting to go on safari for many years, ten to be exact, but I didn’t want to travel by myself”. She went on to say… “even when I offered to pay my kid’s way, they told me they didn’t want to go”. A free trip and still no takers. I know that story personally, as my son still has not yet committed to going – free. She went on to tell me that she had tried for years to get her husband to go, but he continued to tell her that Africa was not on his list of places to go. She further told me that almost no where for him was on his list of places to go, so she resigned herself to never going on a trip that she’d always dreamed of, longed 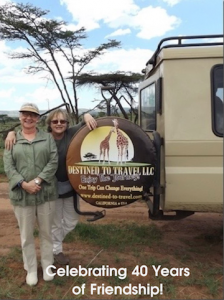 for. When he died, her hopes and dreams of going to Africa were all but gone.
Then one day, as she continued her story, a new neighbor moved on her block and she and the neighbor became good friends. She was sharing with the neighbor about the places she had thought she would travel to in her life and telling her how her husband did not want to go, so she rarely got out of the house and now it looked as if she never would. She sounded sad when she was relating this to me, as if she were reliving the conversation with her neighbor. Then she lit up, as she told me about how she shared with her neighbor how she’d always wanted to go on an African safari. The neighbor’s interest peaked, and for days they talked about it. Soon, much to both of their surprises, they were both planning their safari adventure.
I remember that story so vividly, even though it’s been several years. I remember that story because I have heard it repeated time and time again. The names and location change, but the scenario is the same. I so admired that lady, who decided after piquing the interest of the neighbor, that they finally made that journey together and both were havin 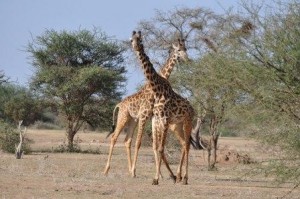 g the time of their life, grateful, with so much admiration and appreciation. The neighbor shared with me, that had she never met this neighbor, whom she now called a friend, she probably would never have considered this type of an experience, but she too, was grateful that the possibility came into her life, as she put it, before her life cycle was completed. They spoke of their experience up to that point, and both had nothing but praise for the driver with whom they were assigned on this 12-day trip, to various camps owned by the company.

I loved hearing their story. As it turns out, this lady was in her 80s, and the neighbor was close to 90. They were on a safari with a company with whom I often booked my safaris before I started my owncompany. Do you believe in coincidences? Or Luck? Or Fate?  Well, as luck or coi 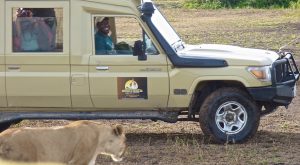 ncidence would have it – the driver they were giving praise too had been my driver also when I was staying at that specific property. Here’s the ending of that story and the ‘fate’ part of it –  Their driver then, for that company was none other than my driver now for my company, Destined To Travel!