The African Connection – Tracking Your Roots

It’s October 2016 and I have just returned from Ghana, formerly known as the Gold Coast. Ghana sits in the western region of Africa, between Cote D’Ivoire and Togo Africa. It is most known as the origin of the Transatlantic Slave Trade that began in 1482. The Portuguese had already discovered Ghana eleven years earlier. They initially came for the gold and stayed for the Slave Trade. This is the story of the forced exodus of Africans, from their motherland to various unfamiliar places, of turning one African against another, one village against another, of living and dying in chains, of forced hunger and sleep deprivation. Slaves, after all, weren’t considered as people, and deserved no more than this!
The Portuguese built Elmina Castle eleven years after their arrival, and it was this Castle (Fort Elmina) that began the era of the Trans-Atlantic Slave Trade. The Dutch and the Portuguese often fought for the right to the gold, and thus the slave trade and it was in 1529 that an agreement was signed with the local Africa chiefs that when an African was caught trading with other Europeans apart from the Portuguese, he would be whipped and have an ear chopped off the first time and the second time he would be killed. 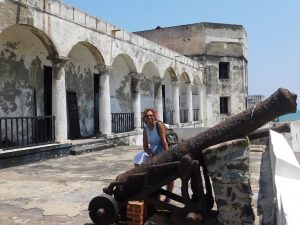 FROM THE PORTUGUESE TO THE DUTCH TO THE BRITISH

The Portuguese and the Dutch had wars of their own, when the Dutch tried to overthrow the Portuguese in 1596, and take over the Castle, they were defeated and soon built their own fort in Fort Nassau, a village about 20 km from Elmina. In 1637, the Dutch launched an attack unlike any other on the Portuguese, from land and sea and the Portuguese surrendered. In 1637 the Dutch took control of the dungeons and the castle.
Slave Trade was at its peak after the Dutch took over and none of the local people were happy. The Dutch, realizing the threat the locals could pose, built forts on all sides of the hills in Elmina to secure all the inland routes. Fort Elmina sat on the highest hill. Once the Dutch took over, they built and expanded the dungeons in the castle to house the large numbers of slaves, and the trans-Atlantic Slave Trade took off and continued under their rule until 1872 when the Dutch no longer considered the Slave Trade profitable and it was abolished by them and sold to the British. While for the purposes of this condensed, it is important to note that the slave trade went on for 400 years.
If the locals thought it was bad under the Dutch, they were in for a very big awakening. The British began making alliances with different communities, turning one community against another, and now there were groups of enemies throughout the villages, and throughout a single tribe, enemies flourished. The British were now their Masters or in layman’s terms, had been sold to the enemy. The local townships were bombarded and during the Second World War, the British brought men from all the English speaking West Africa countries (except Liberia) nations where they were trained to fight for the English. They were known as the Royal West African Frontier Force.

It is the largest and oldest existing castle connected to the trans-Atlantic Slave Trade. It is still in good condition today because it was built on sedimentary rocks believed to be over a hundred meters deep. It is isolated from the community with moats, over which suspends a drawbridge, allowing no one to enter or leave the castle when it is lifted.

All the rooms on the ground floor, except two cells became dungeons for the male captives in this era. Of those two cells that were not used as dungeons, one was a room for European soldiers who got drunk and misbehaved. Of course this cell was well ventilated because it was for the Europeans. The second cell was the condemned cell for captives who fought for their freedom. There was no ventilation and not a streak of light. They were given no food or water until their death. They were chained together. Some of the chains still exist. When they died the soldiers threw the bodies in the sea. One would see someone die in front of them but would not be able to do anything but cry. A dead body could be beside you for days, weeks or longer before being removed. There were tribal kings, and royalty who were also slaves. No one was immune during this horrific time.

WOMEN ARE EQUAL IN THIS HELLHOLE

There were women too, who had their own dungeons, who fell the same fate as the men. The other slaves occasionally bathed some of those selected to ‘service’ those British who were in a position to select the women that met their fancy. This was often the only time they were allowed to bathe, in a vat of dirty water. It was certainly the only time they were allowed outside of the cell they were being held in.  As they took those steps up to the Master’s area, you could feel that emotion as you veered down the depths of the bottom of that pit.

THE POINT OF NO RETURN

As slaves were bought and sold, they walked through the door of No Return, (Many will remember the iconic photo of President Obama in that very doorway in 2009), never to be seen or heard from again, for they did not know to where they would be taken. Ships waited at the dock, to load the cargo and begin that horrific journey across the Atlantic Ocean. Many just jumped overboard, chained to others, sometimes 100 deep. Over 6,000,000 slaves died during this period of the Trans-Atlantic Slave Trade. 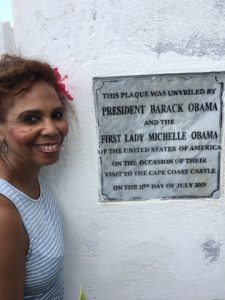 Slavery is defined as the process by which a person becomes a slave and a ‘slave’ being a person who is legally owned by someone else, who works as a servant for that person and who has no or very little personal freedom. From Africa alone, over 400 years, its people were subjected to the worst human atrocities that the continent and Africans all over have not easily been able to overcome. A slave was the absolute property his/her master, had no protection against the wickedness, could never marry without consent, could never own property, could never earn his/her freedom and was a tool to be used and discarded at the whim of the Master. It was not a crime if a free man killed a slave.

And so one of the worst times in history is captured through a visit to Elmina Castle and Cape Coast Castle. The Portuguese started the Trans-Atlantic Slave Trade, taken over by the Dutch and ended with the British. It compares to no other time in the history of mankind within the last 2000 years. It is not for the faint of heart, but it is the reality of the era and many Africans feel it’s effect today in every sphere of life. It is the truth that so many don’t know and should, that others may choose to ignore or not understand and still others are not old enough to appreciate the horrors of those atrocities in an era where Black men and women were considered property, not people.

Ghana isn’t for everyone, that’s for sure. Looking for unique fabrics, this has to be the location.  I can sort it out for you if it’s something that you’d like to know more about. Certainly I learned a lot from the experience.

References: My personal visit and Elmina, The Castle & the Slave Trade.