Helping Kids while on an African Safari

This is a different kind of African Safari adventure. In this article I will only concentrate on our adventure with the children at Leaders of Tomorrow School. This was a most unusual adventure by itself while on an African safari in Tanzania Africa with Safari Kay.

In February my husband and myself traveled to Tanzania, Africa to work with the amazing group of kids at the Leaders of Tomorrow School run by Pete O’Neal and Mama C. We traveled with Kay Trotman and Destined to Travel. He taught the kids how to work with computers and I had the honor of doing Rolfing SI sessions with the kids!

A brave soul went first and within a few minutes he was totally settled and felt more ease in his body. The next young man was so relaxed that he fell asleep. And the third in this initial round of sessions really felt a difference in the space he felt in his body. Once they saw how gentle and relaxed the kids that went first were other become more interested. After the sessions for the first three were over all the kids were sent to go get ready for the next event but the three that had received sessions were so relaxed that they just hung out with me for a bit letting things settle in.

We started looking at things they do in their daily lives to help keep their bodies healthier. From a fundraiser we did before going, each kids got a tablet and so we did a body awareness class to teach them how to use their tablets without hurting themselves in the process. By the end of the week all the kids were into having a session and while working with the last kid four other kids came over and put their hands on her. They wanted to know how it worked and what to do. It was amazing to experience their curiosity! 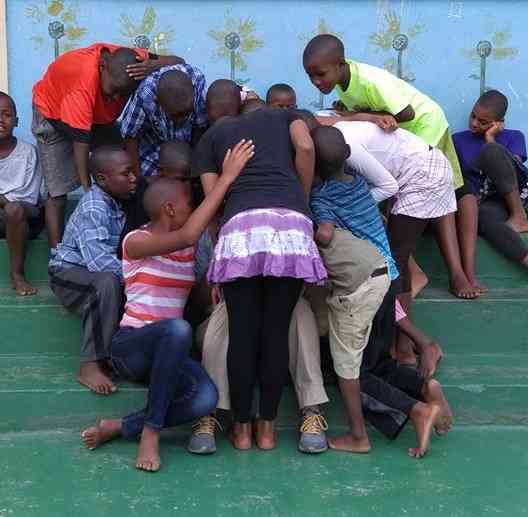 Other highlights were getting 23 hugs every night from each child! Celebrating our dear friend Minh! Seeing the animals on Safari and being is a state of pure joy!

The photo below is one of my favorites. It was taken by Stephanie Thai after the kids did a fashion show and wanted to see their pictures on my camera! Can you spot me?

It was unforgettable experience, so much so we are planning on going back next may!