I’m on the road or in the air, probably going or coming back from a safari or other travel destination. I’ll be adding comments occasionally. 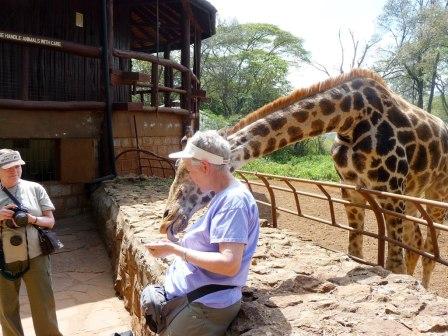 Arriving on the on the outbound flight on KLM from LX to AMS (Amsterdam), the time seemed to fly by. This is the segment that if I am able to sleep, it is on this overnight flight. However on this 9 hour + flight, I was armed with a good book that I intended to finish en route. The entertainment system was well stocked with movies I had not yet seen, but I was engrossed with the book, ELEPHANT, written by one of my sister networkers, Sherry Chin Heijkoop ). I finished it about an hour before landing, so the time to sleep escaped me. I wasn’t even sleepy, not sure why, perhaps it was that bottle of MIRANDA, I’d just picked up from Roy, another of my networking friends, and had just finished the morning of the trip,. If that was the reason, I was grateful.

In flight I met three men from Los Angeles area, who I first thought were hunters, and I was unsure whether to approach them. As one may surmise, hunters are not the most well liked group of people you’d want to meet or talk to, especially if you are going camera hunting and they are going shoot hunting. But I put the thought off my mind, and begun a conversation. They were headed for Tanzania to conquer Mt. Kilimanjaro. Now armed with much more information from me about Tanzania, they were stoked to start their journey. I told them to send me a photo at the top of Uhuru, the highest peak. I know they will summit, so that was not as issue, and they too fit and confident they would summit. I will let you know.

The next 10 hour segment of the trip went fast as well. This is the segment that I try to stay awake, so I can sleep once arriving in Africa, I remember eating, then watching Hangover III, and waking up only to find there was only an hour left of the journey. I had missed the ice cream and pizza snack the airlines had served. That was okay, because after flying KLM for many years, their menu hasn’t changed and it was not ‘all that’.

So, I arrived in Kenya at 8:10 just as scheduled, uneventful, thank goodness, and safe. The chaos that followed was anticipated, as I knew Kenya was reeling from a major fire at the airport just a little over a week ago that burned 50% of the Airport, so I knew there would be chaos. Although ready for the adventure to start, I didn’t expect it to start before leaving the Airport, but it did. The international arrival hall was completely destroyed, so make shift ‘wedding’ tents were strung along the edge of the runway. In Kenya, there are no jetways, nor in Tanzania, so one must be ready to haul their over packed and overstuffed luggage down the stairs. We were bussed to the appropriate tent, to first clear customs….with lines and more lines. Fortunately, I had sent off for my Visa in advance, so I escaped that rather lengthy line. See, potential travelers what you may miss if you follow my instructions and send off for your Visa ahead of time. I’m sure those lines were more than a couple hours wait.

Then the next part of the adventure was finding my luggage, after waiting for delivery of six other flights, our luggage finally arrived, but this too was a process, that was long and orchestrated. Finally after arriving at 8:10 pm, at 10;45 pm, I was on my way to my first stop.

Let me interject something here……as chaotic as it was at the airport, I have to give props, that a system was in place as fast as it was after the fire, albeit make-shift, albeit more chaotic because of the frustration of the passengers, there was a system in place. It was not the best situation obviously, (not having the fire would have been the best), but under the circumstances, I would have to say, in some ways the system worked better than it did, prior to the fire. the fire was electrical in nature, and no terrorism involved. The source of much of the frustration was waiting and waiting ad waiting, with so many fights arriving during the wait time, making the luggage pickup, more daunting.

Fortunately through the crowds of literally hundreds of those holding signs for arriving passengers, my driver was in the crowd, holding up my name sign. This would be different in Tanzania where I almost always have the same driver. So off we went.